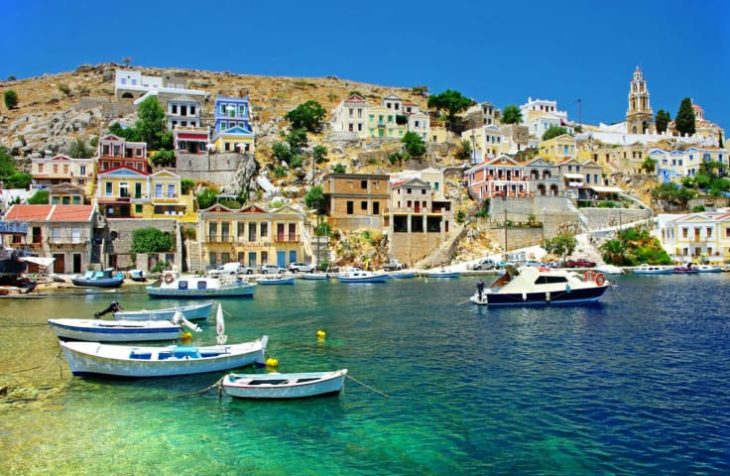 Bright sun, clean sea, excellent cuisine and a vast number of attractions – all this is favourable conditions for a holiday in Greece. This country is located in the South-Eastern part of Europe. In addition to mainland territories, it includes more than 1400 Islands.

The advantages of holidays in this country, which often have a final impact on the decision to go here, are relatively low prices, availability and many tours. The picturesque Mediterranean coast and a vast number of Islands attracts tourists from different countries. Greek shores have a unique charm, which can not resist. They are ready to welcome guests from late March to mid-June or early September to late October. Greece is especially useful in May, where to go at this time of year is worth it.

Greek civilization was reflected in the culture of many countries. That is why the study of Greek history is becoming more attractive. This is a beautiful country that combines modernity and antiquity. Here everything is shrouded in a veil of unique atmosphere, and philosophers and other ancient Greek sages are still known throughout the world.

Sunny Santorini, officially called Tyra, is the largest and perhaps most beautiful of the Islands of the Cyclades archipelago, located in the Aegean sea, southeast of the Greek mainland. What makes many travellers abandon the widely advertised resorts and go to the modest island of Santorini?

Attractions of this place, of course! Breathtaking views from the high cliffs, snow-white churches with bright blue domes and archaeological treasures of a lost civilization-this is what you need to see with your own eyes, and it is worth going to the other end of the world.

Mykonos is a resort that has become a legend. This is the perfect place for everyone to relax and get a lot of pleasant experiences. This is a real Greek Olympus for luxury lovers. Only here instead of ancient gods and goddesses world celebrities – representatives of music and cinema, sports, etc. gather here. Mykonos can be safely called the island of youth where the holiday never stops.

Did you know that among the regular guests of the island there are such stars as Sophia Loren and Madonna, Nicolas cage and Elizabeth Taylor, Russell Crowe and Michael Jordan.

Today, this Greek island requires absolutely no advertising. A summer trip to Mykonos is almost the same as a winter trip to Switzerland-a holiday that has long been a tradition. The island is a beautiful combination of pristine natural beauty and social life of the Mediterranean.

Destinations in Greece it was initially built with only four seats, as well as can accommodate up to 5,000 viewers. Now this place is one of the significant vacationer destinations in Greece. In ancient times, Delphi and the sanctuary of Apollo were the most important centre of the religion of the ancient Greeks. The old theatre with a capacity of 5,000 spectators was built on a hill overlooking the sanctuary and the surrounding landscape.

Mount Athos is a mountain and a peninsula in northern Greece. The easternmost island there is and also is a vast building residence to around 1,400 monks in Eastern Orthodox abbeys. These places include the autonomous State under the sovereignty of Greece, vacationers that go into Mount Athosare purely controlled, and also just men are allowed in for a browse through to among the visitor attractions in Greece.

Lindos Beach, as well as the coastline of Saint Pauls, are just a short distance from the city. Tourist attractions in Greece are hugely preferred and muchgone to by vacationers each year. The medieval village on the island of Rhodes is made up of a network of narrow stone streets and snow-white houses.Overlooking the town is the Acropolis of Lindos with impressive views of the surrounding harbours and coastline. The beaches of Lindos and Agios Pavlos are nearby.

Parthenon gets on top of the Acropolis, and among the destinations of Greece’s most well-known, and a visit to Athens will certainly not be complete without visiting this temple. The construction of the Parthenon started in 447 BC, to change the old holy place, which was ruined by the Persians. Throughout the history of the Parthenon, the sacred site has long worked as a temple, fortress, Church, mosques in numerous different durations.

Because of the color of the water is lovely, found in the North-West of Kefalonia Myrtos coastline is a traveller area in Greece are preferred. Located on the South-Western tip of Kefalonia, the beach fascinates with its shades. The blue and turquoise waters contrast with the white pebbly shore. The steep cliffs that surround the beach complete the magical landscape. Blue as well as blue-green contrast dramatically with the bright white of the sea, in addition to marble stones along the coast. The hills are high and steep high cliffs behind the coastline of Myrtos significantly contribute to the appeal of this coastline. For all this beauty, Myrtos has formerly been 12 times awarded as the best beach in Greece.

Meteora (floating in the air) is in the Centre of Greece which is a collection of six fantastic monasteries located above some of the pillars of stone.Attractions in Greece this is amazing, especially if You enjoy the surroundings from the top of the monasteries. Meteors are famous for their rocks as iffloating in the air, and monasteries on their heads. Now from 24 monasteries, six remained, and access to them was carried out using suspended ladders or grids.

9. The royal residence of Knossos

The biggest of all Minoan palatial structures, it covers over 20,000 square meters and includes numerous areas, as well as colourful as well as lovely frescoes. It is composed of an old palace developed around 2000 BCE, which was ruined by an earthquake, and a more recent framework built promptly after.

Situated in between the Adriatic and Ionians Seas, the island of Corfu, off the coasts of Albania as well as Greece, is an accessible location in Greece. It’s home to a stunning Old Town dating from the 8th century. The Old Town has actually been influenced by Venetian, British, French and also Greek society. It has attractive neoclassical estates, a puzzle of narrow streets lined with keepsake restaurants, cafés and stores and even a couple of stunning structures and squares, along with three ft.

The length of the famous gorge, which stretches in the South-Western part of Crete, is 16 km. Hiking through the canyon is very popular among visitors-every year more than 400 thousand tourists travel through the gorge. The hike lasts 4-7 hours.

The former capital of the Peloponnese (in the XIV-th and XV-th centuries)is located near ancient Sparta. The city was settled during the Ottoman period but was abandoned by the last inhabitants in 1832.

A mountain and Peninsula in Northern Greece, the Eastern “finger” of the Halkidiki Peninsula is inhabited by more than 1,400 monks living in 20 Orthodox monasteries. Only men are allowed to enter the Holy Mountain.